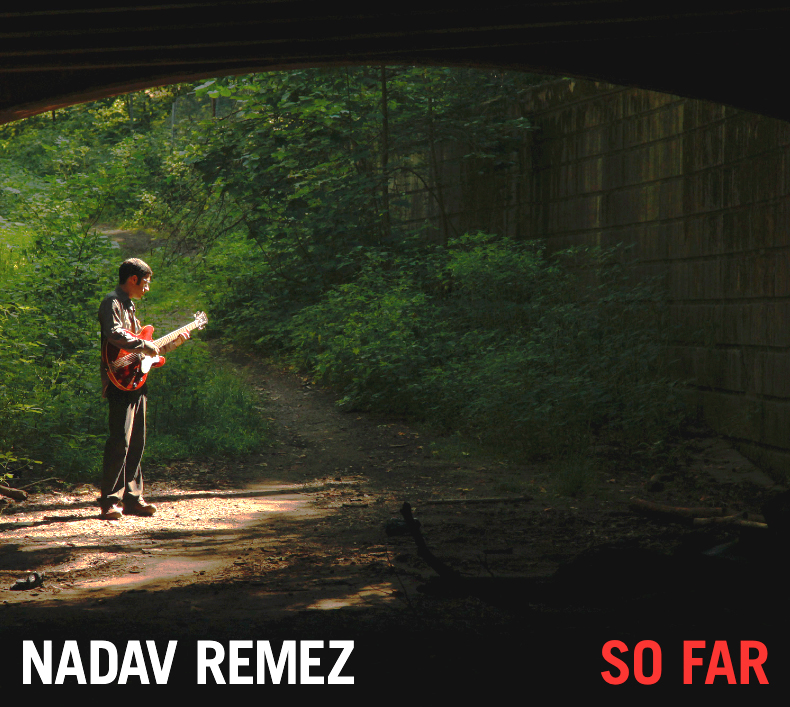 Listen/Buy on Bandcamp
Listen on iTunes
Listen on Spotify
NEW! Charts available for purchase on the sheet music store

“So Far” is guitarist Nadav Remez’s long-awaited debut release, and presents nine new original pieces that draw influences from modern jazz, alternative rock as well as jewish and middle-eastern folk. It may be called a concept album, as the order of songs as well as the connection between them reveals a bigger picture. The songs on ‘So Far’ lead into one another just like chapters in a story with a beginning, middle and end. The improvised solos also correspond to this concept, and starting the second song, each pair of songs features a different soloist, like characters that appear in different parts of a fairy tale.

“An unassuming artist with a penchant for indie rock, he is forging a style built on understatement, logic and clarity.”

“catching the crowd’s ear with his own consistently seductive lines, Remez showed why he has emerged as a standout among a new crop of Israelis making waves in the jazz world.”
– Philip Lutz, The Jewish Daily Forward

“A Thoughtful composer and accomplished player, Israeli-born guitarist Nadav Remez has fashioned an auspicious debut of poignant melodies, rich harmonies and stirring improvisations that ring out with clarity and emotion… ”

“Remez is not only an extremely inventive guitarist who plays with warmth, taste and imagination, but also a composer of merit whose compositions embrace contemporary jazz, melded with indie rock and Jewish folk music. ★★★★”

“There’s a storybook quality to the music that guitarist Nadav Remez composes for his debut that’s both compelling and heartfelt.”

“Remez is an Israeli guitarist with chops galore but instead of focusing on six string pyrotechnics, Remez articulates an incredible subtly and warmth in his compositions which are perhaps as impressive as his instrumental talent. These haunting melodies take Remez from musician to musical enigma with an intriguing mystery as to where that fine musical line between eastern influence and more traditional western improvisational form and function take over.”

“An effortless hybridization of east meets west that is subtle melody presented on a larger than life scale. Beautiful melodies, harmonic energy without a muddled dynamic tension and an emotive progression make So Far one of the finest releases for 2011.”

“Remez’s guitar, striking as it is, never cries for attention or pulls the limelight to it. Instead, the strings blend handsomely into the larger whole and he presents a piece of work that is stirring, brave and ultimately captivating.”

“The debut album from Nadav Remez, So Far (BJU Records) is surprising and rewarding. Subtle. Beautiful. And gets into your psyche after a couple of spins.”